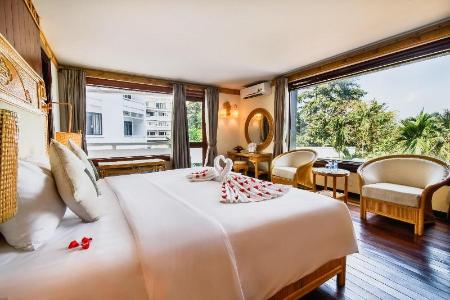 See all
Huong Giang Hotel Resort & Spa
Perfume River,Perfume River - View on map
"We flew to Hue having spent a few nights in Hanoi and Halong Bay. We were met by the hotel driver, in a Mercedes (very nice!). It's about a half-hour ride into Hue itself. The Huong Giang is very well located, right on the Perfume River, within easy walking distance of everything we needed. We had paid a little bit extra for a room with river view; having spent a few nights in a boutique, Old Quarter hotel in Hanoi and a couple of nights in Halong, we wanted somewhere that had a bar to relax in overlooking the river, and the Huong Giang does exactly that. It was dark when we arrived, and we were shown to room. When we opened the curtains, we could not see the River. It's entirely possible that one can see it, in daylight, as it rounds a bend in the distance, but it really wasn't what we'd been hoping for. We went straight to reception and gently aired our disappointment. Within a few minutes (and a Festival beer watching the river), we were re-allocated to room. This turned out to be a suite, bang-smack on the river! The hotel is of medium size and clearly caters to vast numbers of short-stay visitors from all over the world, so we were probably just fortunate. However, the change was accomplished quickly and courteously, and the chap who moved our cases had even picked up my reading-glasses which had been left in the original room. Our room was very clean, comfy bed, perfectly nice. There were one or two small things: the robes could do with being replaced, and I had to ring down for the hairdryer, but these are tiny, minor things. Breakfast is served in a large, attractive restaurant and offers plenty of choice at various stations. We needed to arrange a car transfer to Hoi An, and again this was accomplished very easily and to our specification rather than than to a hotel timetable. Overall, we were very happy with our choice, particularly given the upgrade."
Show more
8.2 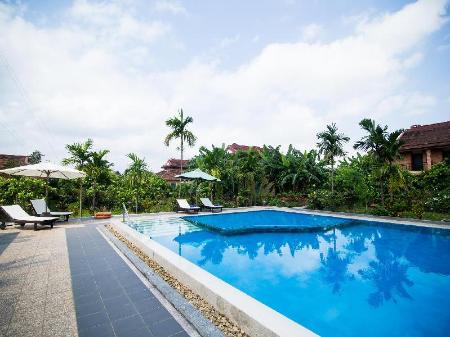 See all
Hue Riverside Boutique Resort & Spa
Perfume River,Perfume River - View on map
"Ling at the front desk was very helpful and kind. The location is perfect if you don't want to be in town. I loved being on the river. And there is a free boat that can take you into town or to the pagoda. A very groovy sunken bathtub was a. nice touch! "
Show more
7.6

Discover the neighborhoods of Perfume River